No to CSE in SA Schools

Sign the online petition against CSE in SA Schools

When mothers live near fracking sites, babies are more likely to be born underweight

Children born near fracking sites are 25 percent more likely to weigh less than what is healthy at birth, according to a new study. Why this is happening isn’t clear, but the researchers believe that it might have to do with environmental pollution, which may have negative health effects on mothers — and their babies.

Researchers analyzed data from more than 1 million births in Pennsylvania from 2004 to 2013, before and after fracking began. Babies born to mothers living up to 1.8 miles from a fracking site were found to have poorer health, and babies born within 0.6 miles saw the largest impacts, according to a study published today in Science Advances. The findings could have implications for where fracking is authorized, and how close to towns drilling takes place.

Previous studies have shown that fracking causes air pollution that can harm babies, and that living nearby fracking sites is linked to premature births. Today’s study adds to the evidence that the shale gas boom comes with some serious side effects. “There’s growing evidence that living close to unconventional natural gas development might have implications for population health,” says Joan Casey, a postdoctoral researcher at the University of California, Berkeley, who was not involved in the research. “This is one of the largest studies to date showing that.”

Fracking, short for hydraulic fracturing, uses a high-pressure mixture of water, sand, and chemicals to crack sediment layers so that oil and natural gas can be tapped. The technique has revolutionized the energy landscape in the US, lowering energy prices and reducing dependance on coal. But it’s also alarmed scientists and activists alike for its potential to pollute groundwater, affect air quality, and cause earthquakes.

As several states like New York and Maryland have banned fracking, scientists are trying to figure out what impacts the controversial extraction technique has on health — especially when it comes to newborns. A 2014 study, for example, found that children born to mothers living nearby fracking sites may have a higher risk of heart defects. “Looking at the impacts of these chemicals on the most vulnerable population, which is unborn children, and finding these effects is really concerning,” says Carol Kwiatkowski, the executive director of the nonprofit research institute The Endocrine Disruption Exchange.

The challenge with these types of studies is that mothers who live near fracking areas, or other polluted sites, are usually poorer than mothers living in say, Philadelphia, says Casey. Poverty is known to affect pregnancy and birth, so trying to figure out whether fracking — or something else — affects newborns is tricky. To get around this problem, the authors of today’s study looked at a massive amount of data: nine years of records from 1.1 million births in Pennsylvania, which has seen a huge increase in fracking over the last decade. They also compared babies born to mothers living near drilling sites with mothers living farther away, both before and after fracking began. To be even more sure, they compared siblings born to the same mother before and after fracking wells were active. 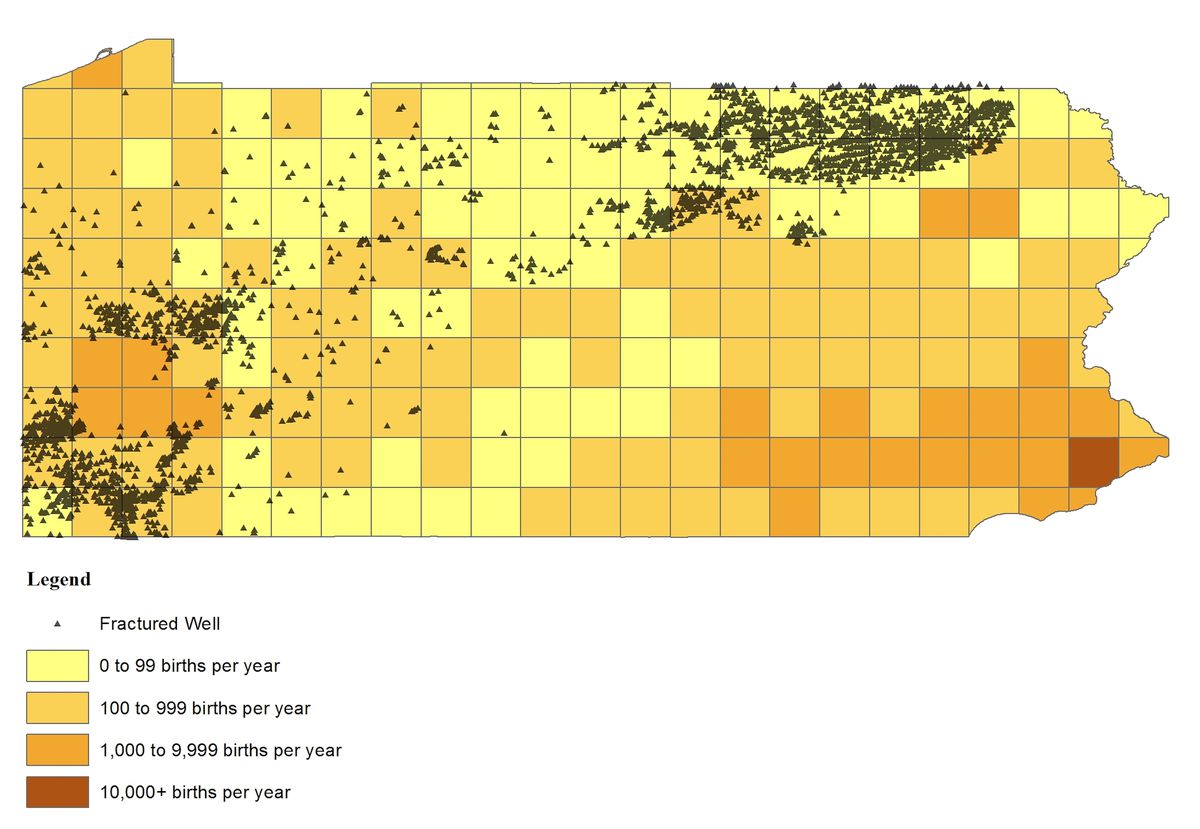 The findings: mothers living within 0.6 miles of a fracking site have a 25 percent higher risk of delivering a baby that has a low birth weight. The risk is lower but persists for kids born to mothers living up to 1.8 miles from a site, but it basically disappears moving farther away. A low birth weight is linked to serious health effects, like premature death, asthma, ADHD, and learning disabilities. Those long-lasting health impacts should be taken into account when considering the pros and cons of fracking, says study co-author Janet Currie, the director of the Center for Health and Wellbeing at Princeton University. “What I’m hoping is that combined with other studies showing that there are health effects of fracking, that we can move on to the next stage of the discussion,” Currie says. “How can we keep the benefits and reduce the costs?”

The study has some limitations: notably, it doesn’t say what exactly may be affecting the babies during pregnancy. Currie says it’s likely the air pollution tied to the fracking activity, but the researchers didn’t actually take biological samples from the mothers to check whether they were exposed to pollutants. Those kinds of studies take time and resources, and don’t allow for very large sample sizes, Currie says. So, it could be environmental pollution, but it could also be that social and economic conditions change in rural areas after fracking is introduced, and those are what are impacting pregnancy, says David Savitz, a professor of epidemiology in the Brown University School of Public Health. “I don’t think it adds a lot to the evidence that environmental exposures related to fracking are causing problems with pregnancy,” he says. “That’s really the ultimate interest.”

The oil and gas industry criticized the study, saying it paints an inaccurate picture that ignores factors like lifestyle habits and family history that are known to affect a baby’s health. “Given these deep methodological flaws, it's dangerously misleading and inflammatory to suggest that natural gas development has done anything but improve public health,” Erica Clayton Wright, spokeswoman for the Marcellus Shale Coalition, wrote in an email to The Verge.

Still, the researcher suggests that the new shale gas boom isn’t harmless. And the long-lasting health effects linked to fracking should raise some eyebrows. Every year, about 29,000 babies in the US are born within 0.6 miles of an active fracking site, and over 95,000 within 1.8 miles, according to the study. “This is one big human experiment,” Kwiatkowski says. “What’s going to happen in 20 years when these babies are growing up?”